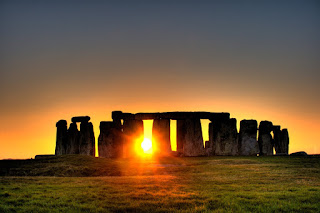 
About ten years ago my wife and I traveled to Europe for the first time, visiting England and France. One of the sites I really wanted to see was Stonehenge. This site was not on our itinerary originally, but we did have the opportunity to visit Stonehenge -- it was a very cold and wet December day. I was not aware at the time that according to many sources Halloween’s origins date back to the ancient Celtic festival of Samhain, that is pronounced sow-in. The Celts, who lived 2,000 years ago in the area that is now Ireland, the United Kingdom, and northern France, celebrated their new year on November 1. This day marked the end of summer and the harvest and the beginning of the dark, cold winter, a time of year that was often associated with human death. Celts believed that on the night before the new year, the boundary between the worlds of the living and the dead became blurred. On the night of October 31, they celebrated Samhain, when it was believed that the ghosts of the dead returned to earth.
Ascolta Questo: Stonehenge, in Inghilterra, è veramente una misteriosa struttura risalente a 2000 anni prima della nascita di Gesù Cristo. Dieci anni fa io e mia moglie abbiamo visitato Stonehenge.
Alla prossima!