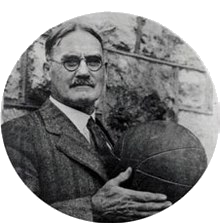 Our basketball teams have been doing quite well this school year, and they are in playoff games this week. So who invented the game of basketball. It appears that the inventor of the game was James Naismith (November 6, 1861 – November 28, 1939). He was a Canadian-American physical educator, physician, chaplain, and sports coach. An interesting note is that the game was originally played with peach baskets. Each time a player made a basket the game had to temporarily stopped so someone could retrieve the ball with the use of a ladder. Later the bottoms of the peach baskets were cut out. (Now for a practice script in Italian . . . grammar corrections are welcome.)