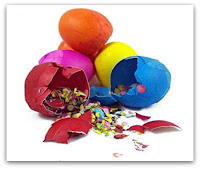 We had not had young children hunting Easter eggs in our backyard in a few years. This afternoon two grandsons came to hunt for cascarones -- colored, confetti-filled eggshells. We all had fun breaking the cascarones on each other's heads. So where did the idea of confetti-filled eggshells come from? Here's a one-minute history. First seen in Asia the idea was later brought to Italy by the famous explorer Marco Polo. At that time the eggs were often given as gifts and were filled with perfumed powder. The custom traveled to Spain and it was later brought to Mexico in the mid-1800s by Emperor Maximilian’s wife. It was in Mexico that the perfumed powder was replaced with confetti.Cascaras is the Spanish word for eggshells. There you are. (Grammar corrections are welcome for the practice script in Italian below.)